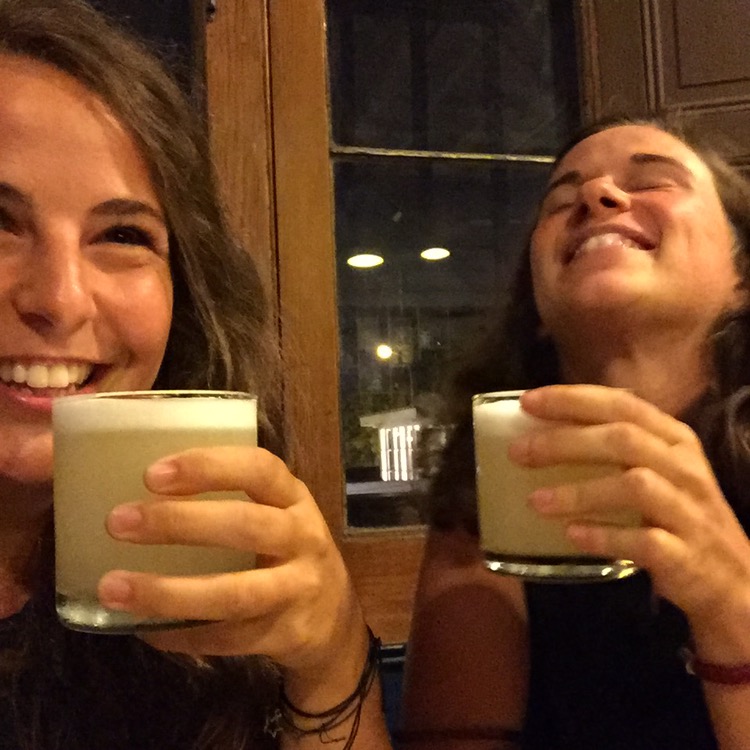 As I have worked in a Latin American-inspired restaurant in Vienna, Pisco – the national drink of Peru – was not new to me. It was not until I actually visited the country earlier this year, however, that I really began to realize how diverse Pisco is. Having spent over a month travelling there with my dear friend and Two Drink comrade, Judith, I think it’s safe to say that we have now both sampled more than our fair share.

Cusco, 2016
„Have you ever tasted spirits pure?“, Israel, our guide, asks. He sounds worried. „Yes, of course“ comes our reply. „You can also have a cocktail tasting. Are you sure you want to have pure Pisco?“

Well – as you can see – it took some time to convince Israel that we would be fine and were seriously interested in the pure product. Once he finally gave in, we got rewarded with a mountain of knowledge that we would like to share with you.

Peru, 1550-1613
Not long after the Spanish conquistators landed in Peru, they started to produce wine in the country. In the late sixteenth century, the Jesuits began distilling the wine and – thus – an early form of Pisco was born. The first written mention of grape brandy production in Peru date back to 1613.

There are several explanations for how this unusual brandy got its name. Some say that the word ‚pisco‘ comes from the Quechuan word ‚pisqu‘, which was the name of a bird found in the Ica valley region of Peru. Others believe that it was named after the town of Pisco, a port city near the Nazca lines from which the spirit was shipped to Lima as well as popularised by sailors. The name is also said to come from the large pre-Colombian clay pots, called piscos, that are used to ferment the grapes.

Since 1990
Pisco production differs a lot from other wine destillates. The process aims to transfer the freshness from the grape directly into the end product. This means nothing is added; no wood, no sugar, no wate. Nothing. The liquid is neither dilluted nor polluted during distillation.
Furthermore, Pisco is distilled only once. This is why some would say it’s the purest liquor you can get on earth.

Puro is made out of only one type of grape, either aromatic or non aromatic. The characteristics of the grape and the soil are, therefore reflected more clearly in Puro than in Acholado or Mosto Verde.

Achollado is always a blend of two or more grape varieties. Labels usually donˋt show the used varieties as most distilleries want to keep their recipes secret.

Moste verde (=Green must) is the most expensive Pisco product there is. That is for one good reason: Many more grapes are needed to produce this special product. For 1 l of Moste Verde, about 15-20 kg of grapes are needed. This is more than twice the weight needed to make 1 l of either Puro or Acholado (in both cases around 7-8 kg). In order to produce Moste Verde it’s necessary to begin the distillation process before the fermentation is finished – after about 4 days. This ensures less alcohol and a higher sugar content in the must (the still fermenting juice, so to stay one stage before it becomes wine) which changes the characteristic of the end product immensely.

Back at the tasting in Cusco, 2016
We tasted the following distinctive examples of each variety:

Mix it all together. Finish with a hint of Angostura Bitter. Done!

Have we made you crave Pisco Sour? You will find it at any Peruvian Bar or Restaurant, so keep your eyes open. In Vienna we can heartily recommend the Pisco Sour at Mercado. In Capetown, I enjoyed the Pisco Sour at Charango. The main difference you will find outside of Peru is the amount of Pisco used to make each drink. While in Peru you need only two or three to be, well.. let’s say ready for bed, in Austria and South Africa the measure of Pisco is generally much smaller.

Have you tried a good Pisco Sour Outsider of Peru? If so, we’d love to haer your recommendations, als we’re always only too happy to test more.

In case there are any Chileans reading, before I finish it would be rude not to mention that Pisco is not only produced in Peru, but in Chile as well. The fight between those two countries, with regards to where Pisco really originates from, is still ongoing. Who makes it better? Well that depends on who you ask. You’ll just have to try both and make your own mind up.