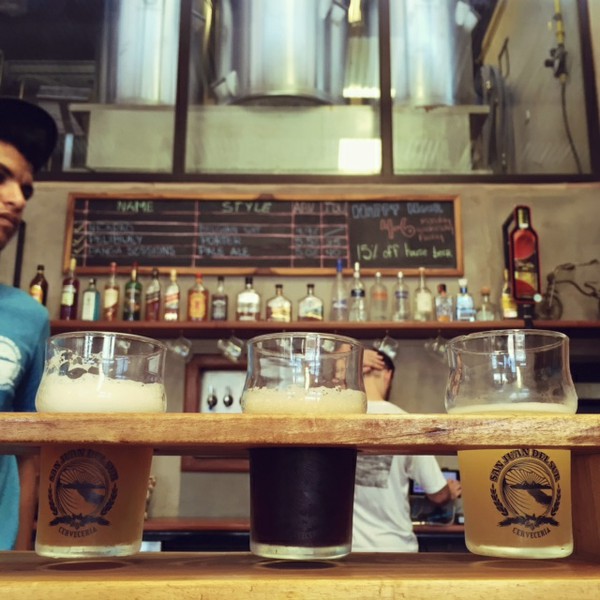 As this blog happened to be enhanced to some kind of travel journal I decided to put my English speaking/writing skills to proof and publish the following article about Nicaraguan Craft Beer in English. It’ll be a first try, so please be patient with me 🙂

However, my current location is still Central America, more precisely Nicaragua. After spending some time in beautiful cities such as Leon, Matagalpa and Granada, I headed to an amazing treehouse in the jungle, enjoyed some delicious Nicaraguan rum there and finally ended up tasting outstanding Craft Beer in a smallish surfer village called San Juan del Sur at the Nicaraguan Pacific Coast. Here I am, sitting on a balcony, watching the red sun disappear from the horizon, happy to have finally found a Central American craft brewery to be visited: San Juan del Sur Cerveceria. At this point, some will probably say that life could be worse. I agree.

Top dogs Toña and Victoria
First of all, Craft Beer has certainly not hit yet the shelves in Nicaraguan bars and restaurants not to mention supermarkets or other grocery stores. Top dog is by far regional produced Toña, a light, yet refreshing and very pale lager. Nothing really special about it but easy to drink at temperatures rising to 30 °C minimum at daytime without really cooling down during the night. It is produced by Compania Cervezera de Nicaragua in Managua since 1926, emphasizing on Nicaraguan authenticity. Besides Toña another top selling beer is „Victoria“, also produced by CNN, offering different options eg. Victoria Light or Victoria Frost. Toña and Victoria are available troughout the country also being No 1 sponsor for all types of possible merchandise at local gastronomy. It is only Nicaraguan Rum „Flor the Caña“ which is able to keep up in terms of market presence.

Craft to be rising
As mentioned before, Craft Beer has by far not penetrated the markets yet but is obviously recognized by some connoisseurs caused by craftafficinaded immigrants from the US and Europe.

During research about the Nicaraguan Craft Beer scene I have only stumbled over a few people who made their dreams come true in bringing their passion and finally their crafts to Nicaragua. There is for example a German guy producing beer under the name of „Erdmann“ in a microbrewery next to Granada. He is selling it almost exclusively to the Granadian Coffee Bar Espressionista where further on it is sold to a very – lets say – trousitical price. Spending 170 Cordobas on 0,35 l beer (Mandarina Bavaria, Weizen, Black IPA) compared to 40 Cordobas for a 0,35 l of Tona strains the budget of a full time backpacker to an almost hurtful extent. Evident, that I didn’t really have another choice since I really wanted to know what is going on around beer in this country I decided to take the Mandarina Bavaria and the Black IPA. Good to have a travel companion who is easily persuaded about this outstanding chance to taste Nicaraguan craft. I was lucky to finally find some really good stuff after a few weeks of abstention from my favourite beverage.
Compañia Cervecera del Moropotente, obviously the only Craft Brewery in Nicaragua which is run by native Nicas, friendly denied my visit request because of Semana Santa (Holy Week = busiest week of the year causing closed shops, crowded beaches, overall crazieness amongst people). Nevertheless, I figured out that there is another brewery who has been brewing beer for only one and a half year. No sooner said than done. I finally ended up visiting picture-perfect surferboys Bobby, Brandon and Matt at their brewery in sunny San Juan del Sur.

San Juan del Sur Cerveceria
It was about five years ago when three US guys realized the lack in Nicaraguan Craft while travelling troughout Central America. Indeed, at this point there was not a single craft brewery established in Nicaragua whereas in neighbouring Costa Rica the scene took root a bit earlier. Being fascinated by the surfers paradise San Juan del Sur, they quickly figured out the potential of Craft Beer in this scenic spot at the Pacific Ocean, worked out a business plan and gained knowledge about brewing back in the US – their home and likewise the home of Craft Beer in general.

They obviously did good preperation as now the business seems to run very well and the beer tastes refreshingly delicious. Visiting their restaurant convinced me about these circumstances (extended to the brewery) where I grabbed the currently offered beerflight from tap:

Nicarao, Belgian Wit. 4,9 vol%
Named after an indiginous Nicaraguan tribe chief. Yellow/light ocher appearance reminicent of whey. Bananas and a hint of lime in the nose. Refreshing mouthfeeling caused by citrus, lime and lemon tastes. Good acidity at first glance is making way for a nicely integrated bitterness. A perfect lemon soda alternative for hot days at the beach.

Panga Session, Pale Ale. 5 vol%
This typical Pale Ale has an orange/light caramel clouded appearance. It is reminicent of ripe fruits. One can smell papaya, jam and even raisins. Achieving a good balance it first remains the ripen fruits that later are accompanied by refreshing lime notes. It even reminded me of local green Jocotes I’ve tasted only some days ago. Ending with a herbal long and bitter finish this beer has a nice full body. Panga is the word for a typical surfing boat.

Pelibuey, Porter. 5,5 vol%
This Porter does not appeare totally black it is rather reminicent of dark caramell or light milkchocolate. In the nose, there are to find hazelnuts, nougat, raisins and dried oranges. Raisins are also present in the mouth. Obvious acidity is making way for an evident bitterness in the end. Nice beer, long finish, however a bit less full-bodied than the Ale. Pelibuey is the name of a local animal that appeares to be a mixture between a goat and a lamb.

After tasting, Bobby gave me a short tour through the microbrewery and also introduced me to the rest of the team. Malt is mainly imported from Germany, hops are shipped from the US. Local connections are being achieved by the use of regional fruit with some special released beers such as: Passionfruit or Mango Pale Ale as well as Stouts with regional Coffee and Cocoa. At the momtent, all the beers are primarily sold at the restaurant/cerveceria. There are extension plans as well as ideas to make the range a bit more unconventional (Flor de Caña rum barrels would certainly add nice aromas to existing recipies).

With hindsight, I’m aware that for now Craft Beer is neither a part of Nicaraguas culture, nor does it have essential impact on the improvements of the countries poor economic situation (eg thinking about all ingredients being imported). Thus, I still like Craft Beer, the spirit it can evoke and the enthusiasm it can cause. Never mind, that it is nowadays obviously interesting for touristic purposes, who knows where developments are going to lead.

At least, it is now making my writing on the terrace even more cheerful. But honestly, with or without craft, I’ve found a new love in Nicaragua. Deacachimba!